Shaking the world with a new dream

I am pacing the sidewalk in front of a two-story brick building, inhaling and exhaling deeply, slowly as the cold autumn wind blows the dry leaves all around me. There is a stark contradiction between the abandoned houses that I see across the street and the intimate community gathering I just stepped out of. This is a place of contradictions and what I am feeling inside perfectly reflects that. My tears are coming down my cold cheeks but I am not sure whether I am crying because of immense love and possibility I’ve been immersed in, or the undeniable decay and collapse of neighborhoods that I see all around me, or the radiant joy and gratitude I feel in my heart having witnessed the most amazing relationships and collaborations in this community, or the overwhelming grief of centuries that this place holds – pinnacle of racism, class warfare, the crushing of human potential by a vicious capitalist system.

Right before I stepped into the cold autumn afternoon, I was listening to Grace Lee Boggs who we visited with as part of the Detroit Learning Journey hosted by Margaret Wheatley in October. The learning journey was an inquiry into and an invitation to bear witness how people of Detroit are re-building community and livelihoods in a post-industrial world. When Grace Lee Boggs spoke her wisdom with her deep grandmother voice, something happened to me. I felt this deep churning inside me, something flipped inside out, upside down and I was trying hard not to break down in tears as I was holding my camera, trying not to miss one word from her mouth. This is what she said:

[Click below to watch video of Grace Lee Boggs] 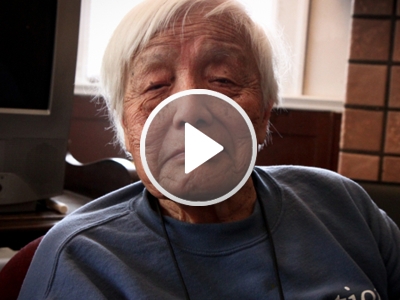 Witnessing everything I had witnessed in Detroit and then being in the powerful presence of a soaring spirit undid me and broke me open: this stark paradox allowed me momentarily to get in touch with a deep grief for human suffering – the burning questions: how did we allow ourselves to go this far, what have we done to ourselves, to each other and to this Earth? While holding the monumental pain, being present to the humbling beauty and simplicity of people doing the everyday ‘work’ of living, being in relationship, being in community, doing their very best, every day, to re-create their beloved city, claiming their greatest power as their capacity to love in the midst of a dying world.

We walked through massive automotive plants falling apart; we drove through streets full of abandoned, burned down, decaying houses; we listened to teenagers singing about social justice; we saw gardens producing abundant, organic food; we have been told by street artists that their measure of success is “the depth and frequency of the unusual relationships in their community”; we listened to stories of pain, injustice, rebellion as well as innovation, possibility and hope; we witnessed an amazing web of relationships cultivated through the Boggs Center, particularly Grace Lee Boggs’ unconditional love and support of the community. In the short span of five days I have probably seen more contradictions then I’ve ever seen in any other place in my whole life.

When everything around us falls apart and the world as we know it no longer works to sustain us and we can no longer ignore the human suffering because it’s everywhere we look, what do we do?

A group of people in Detroit is in this very real experiment: they cannot afford “business as usual” any more. And not only that, they believe in a world where communities can thrive through collaboration, creativity, intergenerational dialogue, play. They also found out the hard way that ‘they were the Ones they’ve been waiting for’ when no one else showed up to ‘save’ them. In Grace Lee Boggs’ words, they are RE-IMAGINING everything.

And when they say everything, they mean everything. In two days we have seen so many different initiatives – from community gardens to youth street art projects to sustainable businesses to alternative schools (the one that blew my mind was Catherine Ferguson School for pregnant girls and teen moms which has a farm on their campus, teaches permaculture and natural building and is facilitating their students to start an intentional community), to co-working spaces to transformative hip-hop venues for youth engagement and social justice.

[Click below to see a slide show of the learning journey] 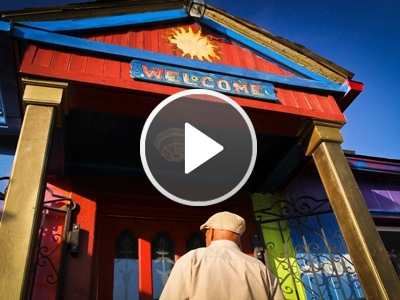 Every single person we met on this journey, from teenagers to 97 year-old Grace Lee Boggs, was grounded, clear on their work and purpose, quite aware of their responsibility to re-imagine and re-create their lives, and they were joyful and passionate! Despite everything that they have lived through, I have not heard or seen a drop of cynicism, complaint, not even anger or blame, from anyone.

The good news is that we have seen the apocalyptic end of capitalism in Detroit and it wasn’t the end of the world. Clearly, a large scale, global collapse of capitalist system might cause bigger disruptions, but I have faith that communities everywhere will rise to the occasion; that once free of the boundaries of this limited, skewed worldview, we will again re-imagine everything!

Perhaps I am wrong. It doesn’t matter. I’ve seen great things happening in Detroit. As for myself, I got a great lesson: keep cultivating relationships – deep, intimate, strong, diverse, intergenerational relationships. They will be the ground, the fertile soil from which everything else will grow strong.

Categories: General, United States, Walking Out and On