Friend and walk out Sarah Zoutewelle-Morris has been sharing with us stories from her community in Warfhuizen, Holland for the past several months. In her last post, Walking (on) the Talk she talked about her work with a neighborhood organization looking to shift a dangerous local traffic situation. She wrote about the challenges of showing up as leader-as-host vs. leader-as-hero in the meetings. Here’s an update from Sarah about what’s been happening.

It’s been 5 months since the traffic action group, Route 30 (Lin 30), formed in our little village in northern Holland.

Since then, we’ve continued to meet weekly and have staged 3 successful events. Our plan has earned our village an ‘encouragement’ medal for traffic safety from the National Traffic Safety organisation; we have received abundant regional media coverage, and have forged important partnerships on local, municipal, and provincial levels.

For me, the success isn’t defined by attaining external goals so much as the connections that are being forged. On a personal level, it has meant an end to my years of feeling isolated here, an opportunity for connection, creative collaboration, and a chance to serve a larger purpose. 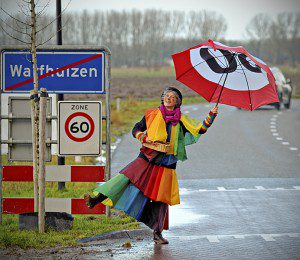 I’m continually amazed at the creativity that emerges from the collaboration of our diverse group. The events are fun, humorous and colourful. On December 30th, for instance, we formed an impromptu choir, directed by a local music teacher who also wrote and arranged some songs for us. We transformed the bridge into a warm, winter scene with burning braziers, torches and sparklers. (See more photos here.)

Other villagers passing by joined us in the singing. And after a freezing hour in the winter dark, the choir members were treated to thick mustard soup with rye bread at the home of one of the singers.

We haven’t had access to nor have we used methods such as ‘Art of Hosting.’ I’m not sure it would transplant here too well. Instead, all our solutions have grown organically out of these particular people, the situation, and the place.

Of course there are local people who are against our group; we are seen by some of the older, conservative villagers as ‘exhibitionist, over the top, and making a fuss about nothing.’ It will be ‘nothing’ only so long as it’s only pets (they don’t seem to count) that get run over, and not children. We try to engage the dissidents in dialogue and invite those willing, to join the events. 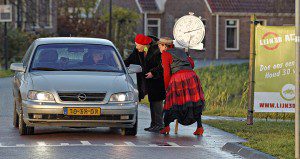 I’m most excited by a recent development, it seems that ‘start anywhere, follow it everywhere’ really is working here. Other neighbouring villages with the same problem are also starting action groups. They seem to have the same positive, creative character as we do. And we have already been asked to share some of the knowledge and experience we’ve gained through our work so far.

We are hoping that gradually, all these separate initiatives will unite to form a strong protest group with the clout to exert pressure to enforce the changes needed to make our village roads places to meet, play and move safely.

This all started because a handful of neighbours decided to turn their powerlessness into positive action. It started because the systems failed us through their top-heavy bureaucracy and ponderous inaction. We decided to take things into our own hands and are finding that these hands, when united with others are capable, friendly, and effective!