Walking Out and On

Meg Wheatley and Deborah Frieze co-authored this article about the role of emergence in taking social innovation to scale. Here is an excerpt.

Emergence violates so many of our Western assumptions of how change happens that it often takes quite a while to understand it. In nature, change never happens as a result of top-down, pre-conceived strategic plans, or from the mandate of any single individual or boss. Change begins as local actions spring up simultaneously in many different areas. If these changes remain disconnected, nothing happens beyond each locale. However, when they become connected, local actions can emerge as a powerful system with influence at a more global or comprehensive level. (Global here means a larger scale, not necessarily the entire planet.) 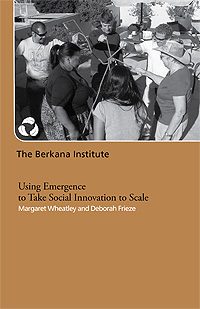 This article by Meg Wheatley and Deborah Frieze explores the lifecycle of emergence (PDF, 504K)

These powerful emergent phenomena appear suddenly and surprisingly. Think about how the Berlin Wall suddenly came down, how the Soviet Union ended, how corporate power quickly came to dominate globally. In each case, there were many local actions and decisions, most of which were invisible and unknown to each other, and none of which was powerful enough by itself to create change. But when these local changes coalesced, new power emerged. What could not be accomplished by diplomacy, politics, protests, or strategy suddenly happened. And when each materialized, most were surprised. Emergent phenomena always have these characteristics: They exert much more power than the sum of their parts; they always possess new capacities different from the local actions that engendered them; they always surprise us by their appearance.

This aspect of emergence has profound implications for social entrepreneurs. Instead of developing them individually as leaders and skillful practitioners, we would do better to connect them to like-minded others and create the conditions for emergence. The skills and capacities needed by them will be found in the system that emerges, not in better training programs.

Because emergence only happens through connections, Berkana has developed a four-stage model that catalyzes connections as the means to achieve global level change: Name, Connect, Nourish, Illuminate. We focus on discovering pioneering efforts and naming them as such. We then connect these efforts to other similar work globally. We nourish this network in many ways, but most essentially through creating opportunities for learning and sharing experiences and shifting into communities of practice. We also illuminate these pioneering efforts so that many more people will learn from them. We are attempting to work intentionally with emergence so that small, local efforts can become a global force for change.